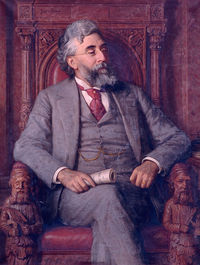 “No one ever attains very eminent success by simply doing what is required of him; it is the amount and excellence of what is over and above the required, that determines the greatness of ultimate distinction.”

Charles Kendall Adams (1835–1902) was an American educator and historian. He served as the second president of Cornell University from 1885 until 1892, and as president of the University of Wisconsin from 1892 until his death. …+