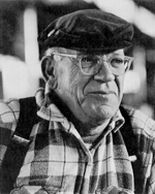 “In a time of drastic change it is the learners who inherit the future. The learned usually find themselves equipped to live in a world that no longer exists.”

Eric Hoffer (July 25, 1902 – May 21, 1983) was an American social writer. He produced ten books and was awarded the Presidential Medal of Freedom in February 1983 by President of the United States Ronald Reagan. His first book, The True Believer, published in 1951, was widely recognized as a classic, receiving critical acclaim from both scholars and laymen.[1] This book, which he considered his best, established his reputation. He remained a successful writer for most of his remaining years. …+