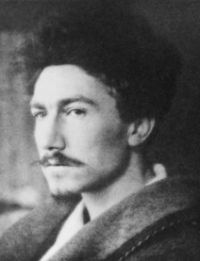 “If a patron buys from an artist who needs money (needs money to buy tools, time, food), the patron then makes himself equal to the artist; he is building art into the world; he creates.”

Ezra Weston Loomis Pound (October 30, 1885 – November 1, 1972) was an American expatriate poet, musician, and critic who was a major figure of the Modernist movement in early-to mid- 20th century poetry. He was the driving force behind several Modernist movements, notably …+