Witness survives by pretending to be dead

BLACKSBURG, Virginia (CNN) — A gunman who killed at least 30 people at one of two shootings on the campus of Virginia Tech Monday was dressed “almost like a Boy Scout,” said a woman who survived by pretending to lie dead on a classroom floor.

Two people were killed in a separate incident about two hours earlier around 7:15 a.m at a dormitory on the campus. University police Chief Wendell Flinchum said police were still investigating whether the two incidents are related.

At a press conference Monday afternoon, Flinchum did not rule out a separate shooter for the dormitory incident. At the time of the later shootings at Norris Hall, police were investigating a “person of interest” in the dormitory shootings, Flinchum said. But the man — a non-student who knew one of the victims — had not been arrested, and it is unclear if he has any link to the other gunman, he said. 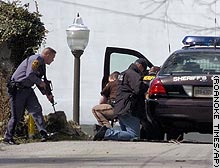 The death total at Norris Hall makes it the deadliest shooting in U.S. history. Erin Sheehan described the gunman — who later shot and killed himself, according to police — as a young man wearing a short-sleeved tan shirt and black ammunition vest.

He peeked in the door a couple of times before returning and opening fire with a black handgun, first on the professor and then on the students, she said.

“He was very silent,” said Sheehan, one of only four students in her 25-student German class who were not shot. “He seemed very thorough about it.”

Sheehan fell to the ground and pretended to be dead after the gunman’s first entrance. But about 30 seconds later, the man returned and opened fire a second time “because I guess he heard us still talking.”

“We forced ourselves against the door so he couldn’t come in again because the door would not lock,” Sheehan said. At that point, the man began firing through the door.

Flinchum said at a Monday night news conference that they had a preliminary identification of the shooter at Norris Hall but were not releasing it.

A law enforcement source close to the investigation told CNN a 22-caliber handgun and a 9 mm handgun were recovered at the scene.

Student Tiffany Otey was taking a test inside Norris Hall when the shooting began. She and about 20 other people took refuge behind a locked door in a teacher’s office. “It was like a continuous gunfire, going off like every second or so,” she said.

University President Charles Steger told reporters Monday night that police found the front doors of Norris chained shut and that by the time they got to the second floor, the gunfire stopped.

Asked why the campus, which has more than 26,000 students, was not shut down after the first shooting, Flinchum responded that police determined “it was an isolated event to that building and the decision was made not to cancel classes at that time.” Steger added, “We had some reason to believe the shooter had left campus.”

Spokespersons for hospitals in Roanoke, Christiansburg, Blacksburg and Salem told CNN soon after the shootings they were treating a total of 29 injured people from the incidents.

Sharon Honaker with Carilion New River Medical Center in Christiansburg said one of the four gunshot victims being treated there was in critical condition.

Scott Hill, a spokesman for Montgomery Regional Hospital in Blacksburg, said 17 wounded students were taken there.

The first reported shootings occurred at West Ambler Johnston Hall, a dormitory that houses 895 students. The dormitory, one of the largest residence halls on the 2,600-acre campus, is located near the drill field and stadium.

Amie Steele, editor-in-chief of the campus newspaper, said one of her reporters at the dormitory where the first shootings occured reported “mass chaos.”

The reporter said there were “lots of students running around, going crazy, and the police officers were trying to settle everyone down and keep everything under control,” according to Steele.

During the second shooting, two hours later, Student Matt Waldron said he did not hear the gunshots because he was listening to music, but heard police sirens and saw officers hiding behind trees with their guns drawn.

“They told us to get out of there so we ran across the drill field as quick as we could,” he said.

Waldron described the scene on campus as “mayhem.” “It was kind of scary,” he said. “These two kids I guess had panicked and jumped out of the top-story window and the one kid broke his ankle and the other girl was not in good shape just lying on the ground.”

Courtney Dalton, a 18-year-old student who worked at West End Dining Hall, said one of her friends had been killed. “All I can do is pray for his family now,” she told CNN.com.

Laura Lisbeth, a 19-year-old sophomore, told CNN.com on Monday evening that while she was at Holtzman Alumni Center she saw one of her friends who had been shot in the arm. Lisbeth said she was shaken by the day’s events. “I’m terrified,” she said. “It’s gonna be so hard to walk back into class and trust that nothing bad will happen.”

Madison Van Duyne said she and her classmates in a media writing class were on “lockdown” in their classroom. They were huddled in the middle of the classroom, writing stories about the shootings and posting them online.

The university is updating students through e-mails, and an Internet webcam is broadcasting live pictures of the campus.

Last August, the first day of class was cut short by a manhunt for an escaped prisoner accused of killing a Blacksburg hospital security guard and a sheriff’s deputy.

After Monday’s shootings, students were instructed to stay indoors and away from windows, according to a university statement.

The university has scheduled a convocation for 2 p.m. ET Tuesday. Classes also have been canceled Tuesday. In Washington, the House and Senate observed moments of silence for the victims and President Bush said the nation was “shocked and saddened” by news of the tragedy.

“Today, our nation grieves with those who have lost loved ones,” he said. “We hold the victims in our hearts, we lift them up in our prayers and we ask a loving God to comfort those who are suffering today.”

Before Monday, the deadliest mass shooting occurred in 1991, when George Hennard drove a pickup truck into a Killeen, Texas, cafeteria and fatally shot 23 people, before shooting and killing himself.

The deadliest school shootings came in 1966 and 1999. In the former, Charles Joseph Whitman, a 25-year-old ex-Marine, killed 13 people on the University of Texas campus. He was killed by police.

In 1999, 17-year-old Dylan Klebold and 18-year-old Eric Harris — armed with guns and pipe bombs — killed 12 students and a teacher before killing themselves at Columbine High School in Littleton, Colorado.

CNN’s Ashley Fantz and Jeanne Meserve contributed to this report.

E aconteceu em uma segunda-feira …
Mesmo para nós que convivemos com chacinas quase que diariamente, esse fato é chocante.
A imagem do pai incrédulo perguntando para a filha “Por quê?!” foi imortalizada pelo Boomtown Rats de Bob Geldof:
“The silicon chip inside her head
got switched to overload
and nobody’s gonna go to school today
she’s gonna make them stay at home
daddy doesn’t understand it
he always said she was good as gold
and he can see
no reasons
‘cause there are
no reasons
what reasons do you need to be shown
tell me why
I don’t like Mondays
I wanna shoot the whole day down”