Music
On stage (1) with Gilberto Gil

He always attracts large audiences wherever (2) he plays (3) in the world. At the end of May Gil was in São José dos Campos-SP and Maganews chatted (4) to him on the stage, just before (5) the show began.

Gilberto Gil is happy, in a good mood (6), and in fine trim (7). In 2008 he left his post as Minister of Culture and began a tour to showcase his new album, “Banda Larga Cordel” – and also to play his older hits. Maganews watched him rehearse (8) with his band, just a few hours before he began his gig at SESC in São José dos Campos. The rehearsal lasted about an hour and a half. Gil stood up (9) throughout, singing and playing without stopping. When the rehearsal was over, he could have had a rest for a while (10) before the two-hour gig started. But Gil remained on his feet up (11) on the stage to talk to a group of journalists. Gil showed no signs of being tired (12). On June 26th he will be 67 years old, but he seems to have the vitality of a 30-year-old. Maganews asked him two questions: 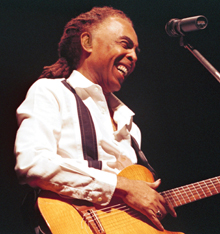 Maganews: You have written some of the biggest hits in MPB, played shows all over the world, won a Grammy, been privileged to play a gig at the UN (13) and you have even been a Minister. What is left (14) for you to achieve?

Gilberto Gil: I don’t think there is anything left.

Maganews: Don’t you have any more dreams to fulfill (15)?

Gilberto Gil: My dream has always been to live well. I have never been ambitious. I just had ambitions to do good work in music. All I want is to keep on working in this area. Music is my greatest muse. It inspires me. I don’t want to be a politician. I don’t want to be number one. Why being number one? I don’t want to be a formula one driver. As long as I have (16) my voice and energy, I will keep on (17) singing, writing and playing.