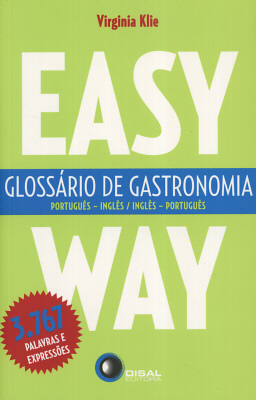 The latest glossary in the Easy Way series is a lovely and welcome complement to Virginia Klie’s first book Not Just Hamburgers! How many among us have not got stuck with a word we can’t understand in a recipe from a book or magazine in English? You don’t need to keep a dictionary in the kitchen anymore. This handy little book brings an extensive list of culinary terms, from ingredients and spices to utensils and food preparation. The book displays an impressive array of words and expressions sure to cover the needs of anyone interested in culinary skills, be it professionally or as a dilettante. However, although the blurb states that British and American expressions are covered in the glossary there is an inclination towards American English. For example, aubergine and courgette only appear as egg plant and zucchini.

Among the seven appendices, perhaps the best feature is the table of conversions of measurements and temperatures, a blessing if you come across a recipe in Imperial measurements. Another useful feature is the section showing the different cuts of beef in the USA and Brazil. Other interesting sections include the extensive list of false cognates, proverbs, expressions and metaphors using culinary terms. Bite off more than you can chew, put (an idea) on the back burner and as red as a beet are just a few examples of these.

A very thorough and extremely well researched book, the Glossário de Gastronomia will surely be a great help to everybody. After all, who isn’t interested in good food?

The reviewer
Augusta Rodrigues Alves is a Lecturer in ESOL at Forth Valley College of Further and Higher Education in Scotland.