(CNN) — Scientists have just released images of the brightest stellar explosion recorded. The supernova, known as SN 2006gy, was believed to be about 150 times as massive as the sun. The explosion could help astronomers better understand how the first generation of stars in the universe died.

“This supernova stands out as the brightest supernova that’s ever been observed,” said Nathan Smith, astrophysicist at the University of California at Berkeley. “The reason we’re so excited is because it was so powerful we think it may require a new type of explosion mechanism that we’ve never observed before,” said Smith at a news conference from NASA headquarters in Washington.A supernova is a rare and often dramatic phenomenon that involves the explosion of most of the material within a star. Supernovas can be very bright for a short time and usually release huge amounts of energy. 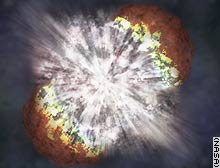 A graduate student using a robotic telescope that was part of the Texas Supernova Search project first detected SN 2006gy on September 18, 2006. For about 70 days it got brighter, peaking with a brightness comparable to 50 billion suns, much brighter than most other supernovas. Supernovas are usually bright for a couple of weeks at most. Astronomers captured the star’s demise using NASA’s Chandra X-Ray Observatory, and ground-based telescopes at the Lick Observatory in California and the Keck Observatory in Hawaii. The explosion was estimated about 238 million light years away from Earth.

Scientists believe supernova SN 2006gy expelled many of its outer layers in an eruption before its violent collapse. When it exploded, it plowed into the cooler gases that had already been expelled, creating the brightest light show ever from a supernova.

Mario Livio, astrophysicist from the Space Telescope Science Institute in Baltimore, Maryland, calls the discovery “extraordinarily intriguing” for a theorist such as himself. “We may be learning something entirely new about how massive stars explode,” said Livio. “We are seeing a new type of explosion that has so far only existed in theory, and we believe the first stars in the universe exploded by this mechanism. It may provide a new lesson in the evolution of stars, and a star in our own galaxy may do the same thing tomorrow,” he said.

Astronomers say the star that became SN 2006gy expelled a large amount of its mass before it exploded. A huge star in the Milky Way, Eta Carinae, has already erupted in a similar fashion. So if it explodes as a supernova, it could present the best light show seen, because it is a mere 7,500 light years away from our planet.

The orbiting Chandra X-ray Observatory, which began its mission July 23, 1999, can detect and capture images of X-ray sources that are billions of light years away. Scientists all over the world use it to get insight about high temperature events, such as black holes and collapsed stars that are millions of degrees Celsius. Chandra is the largest satellite deployed from the space shuttle. The observatory was named after Subrahmanyan Chandrasekhar, the Indian-American astrophysicist who worked at the University of Chicago and won the 1983 Nobel prize in physics. “Chandra” means “moon” or “luminous” in the Sanskrit language.