Naomi Campbell: ‘I have a deep sense of shame’

NEW YORK (AP) — Naomi Campbell says she very much regrets losing her temper and hitting her maid with a cell phone over a pair of missing jeans last year.”I felt very remorseful for having thrown the phone at someone that didn’t deserve it,” the 35-year-old supermodel tells the TV show “Extra” in an interview that was set to air Tuesday. “I have a deep sense of shame for the things I’ve done.” 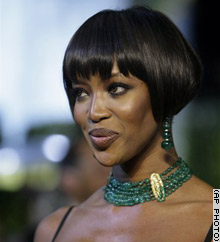 What made her do it? It was “tiredness, lack of sleep (and) just so many things,” she says. “I was being really destructive to myself. … I didn’t know how to reach out,” she says. “It was a really scary time.”

Campbell, who has a reputation for angry outbursts, pleaded guilty to misdemeanor assault last month for hitting Ana Scolavino in the back of the head with the phone last March. Scolavino was treated for a head injury.

“I threw a cell phone in the apartment. The cell phone hit Ana,” Campbell said at her court appearance. “This was an accident because I did not intend to hit her.”

In exchange for her guilty plea, she was ordered to pay Scolavino’s medical expenses of $363, do five days of community service and attend a two-day anger-management program.

“I do therapy every day,” Campbell tells “Extra,” adding that she’s also partaking in the healing powers of crystals: “I think they bring great energy. … You should see how many I travel with.”