The talks in Washington end with an agreement to increase air links, but no word of progress on the deficit issue.

This is the VOA Special English Economics Report.

Top officials from the United States and China held two days of trade talks this week in Washington.

They agreed to increase the number of direct flights between the United States and China. And Treasury Secretary Henry Paulson and Chinese Vice Premier Wu Yi said the talks cleared the way for other progress. But no progress was reported on the issue of the trade deficit. 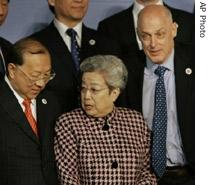 It was the second in a series of talks, the U.S.-China Strategic Economic Dialogue. The next meeting is later this year in Beijing. Vice Premier Wu says talks are better than threats of what she calls “irresponsible” protectionist measures against China.

Some American lawmakers say China is taking too long to raise the value of the yuan. They say China unfairly keeps its currency weak. They say this fuels the deficit by pushing down the cost of its exports and raising the price of American-made imports.

China eased controls on the yuan this week, but not enough to satisfy many critics. China promises more but says a large increase would hurt its fast-growing economy. Some experts say the yuan would rise fifty percent if permitted to trade freely. Others think it would be much less.

China’s huge trade surplus has left it with the world’s largest foreign exchange reserves, more than one trillion dollars. Most of that is held in United States government debt. But China took steps this week to change the way it invests its reserves, in order to seek higher returns.

China will invest three billion dollars in the Blackstone Group, a private-equity company based in New York. The deal will take place as Blackstone sells stock to the public for the first time. But China said it did not want any voting rights in the company.

President Bush met Thursday with Vice Premier Wu. He later said the two countries have a complex relationship but the two hundred thirty-three billion dollar trade deficit must be dealt with.

One of the ways, he said, is to get the Chinese people to spend more, to change from savers to consumers. For example, the United States has been trying to get China to open up its beef market.

The negotiators talked about food safety. The United States is importing more and more food products from China. Yet there is growing concern that they are not always very safe.

Still another issue: The United States is pushing China to do more about illegal copying of movies, music, software and books.