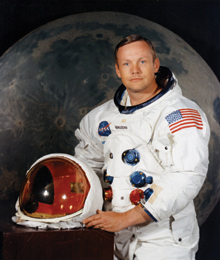 American astronaut Neil Alden Armstrong (see photo) went down in history when he became the first man to set foot (2) on the Moon. He was accompanied on his flight in Apollo 11 by two other astronauts: Edwin ‘Buzz’ Aldrin and Michael Collins. The rocket (3) was launched on July 16th 1969, from Cape Canaveral, Florida, USA. The spacecraft covered over 360,000 kilometers on its way to lunar orbit. As he was the commander, (4) Armstrong had the privilege of being the first man to walk on the Moon. Fifteen minutes later, Aldrin followed him. According to NASA, over a billion people watched it on TV. One of the most notable points in this remarkable event was when Armstrong said: “That’s one small step (5) for [a] man, one giant leap (6) for mankind” (7). In total, Armstrong and Aldrin walked around the Moon for about two and a half hours. Neil Armstrong is now 79 years old, and lives in Ohio, USA.

Brazil only managed to send its first astronaut into space on March 30th 2006. Aboard the Russian spacecraft Soyuz-TMA-8, Marcos César Pontes set off (8) for the International Space Station (ISS), where he carried out (9) eight scientific experiments. He came back to earth on April 8th 2006.

Great article. But I am not sure the men set foot on the moon.