London, England (CNN) — About 16,000 flights are expected to be [devem ser] canceled in European airspace Saturday because of the cloud of ash from the Icelandic volcano, European air traffic [tráfego] authorities said Saturday.

Eurocontrol said it expected about 6,000 flights to take off [decolem] Saturday, compared with the normal 22,000.

Twenty-three European countries were prohibiting takeoffs [decolagens] and landings [pousos] Saturday, according to Eurocontrol and local authorities. Some of those countries kept their airspace open, but it may be difficult to access it because in most cases, the surrounding area [entorno] is not available for flights, Eurocontrol said. 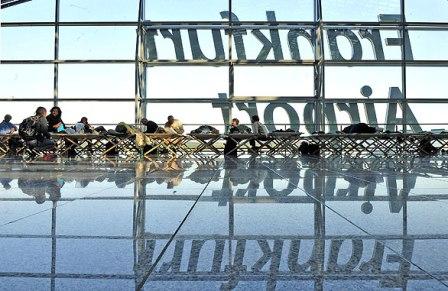 Airlines including Air France, Lufthansa, British Airways, Ryanair and Qantas announced [divulgaram] restrictions to their schedules [horários] in Europe because of the ash, which experts have said can stall engines and cause electrical failures on board aircraft.

Forecasts [Previsões (meteorológicas)] suggest the cloud of ash will persist and that the impact will continue for at least [no mínimo] the next 24 hours, Eurocontrol said Saturday morning.

It was a chaotic scene Saturday morning at London’s Heathrow airport. At Terminal 3, which serves long-distance destinations like New York, South Africa and Washington, passengers complained [reclamavam] they were getting no proper communication from their airlines.

Flight staff [funcionários] were handing out [distribuindo] leaflets [folhetos], and some of the airlines were rebooking [remarcando] passengers on later [posteriores] flights.

It was busy [movimentado], too, at the ferry [balsa] port in Calais, France, where passengers were hoping to catch a ride across [atravessar] the English Channel [o Canal da Mancha].

P&O Ferries, one of the largest cross-channel [travessia do canal] ferry operators, said it was receiving record calls and bookings [número recorde de ligações e reservas] and could not accept any more reservations on the Dover-Calais route [trajeto] until Wednesday.

The company normally gets [recebe] a few thousand calls a day, but by lunchtime [até a hora do almoço] Friday it had logged [havia recebido] more than 30,000, P&O said on its Twitter feed.

SeaFrance Ferries, another major operator, said it had “overwhelming [impressionante, avassaladora] demand” for reservations and was limiting the number of foot passengers [passageiros a pé] it could take on board [embarcar].

Russell, who is traveling by car, said his friend’s father arrived in Calais from Portugal, having paid 2,000 euros ($2,700) to a private chauffeur to get there. The ride [a viagem (de carro)] took [durou] 20 hours, Russell said.

Peter Brown, the founder [fundador] of Brown’s Chauffeur Hire in London, said he is seeing similar fares [preços (geralmente de passagens e diárias de hotel)] as passengers who can’t fly try other means [meios] to get to their destinations.

He told CNN passengers have booked trips [viagens] to Lisbon, Portugal; Cannes, France; Duesseldorf, Germany; Zurich, Switzerland; Brussels, Belgium; and Paris and Lyon in France. “The longest journey was two and a half days to Lisbon,” he said. “It required an overnight stay [pernoite] and the whole journey totaled 4,000 pounds [libras (esterlinas)] ($6,150).”

Businessman J.P. Brommel was attending a TV conference in Cannes, France, when the problems began and said he has been unable [não conseguiu] to return home to New York.

Many of the 11,500 attendees [participantes] at the conference who found themselves stranded [que não conseguiram passagens] have resorted [recorreram] to driving rental cars [carros alugados] long-distance to get home, but one problem is that it’s spring break [geralmente uma semana de férias em comemoração à chegada da primavera] for many countries in Europe. 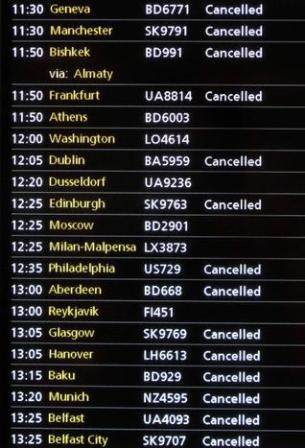 “Even if you can rent a car, if you can find one, you’re going to be dealing with [enfrentará] a tremendous amount of traffic on the highways [estradas] here, so it’s just a touch and go [pouco provável] situation,” Brommel told CNN.

Others are trying to drive to nearby [próxima; vizinha] Toulon to catch the high-speed [alta-velocidade] TGV [abreviação em francês: train (à) grande vitesse (high-speed train)] to Paris, or driving to Madrid, Spain, where they hope [têm esperança] to catch flights home, Brommel said.

“I cannot say whether [se] it’s an overreaction or underreaction [a reação foi exagerada ou insuficiente],” Sultana said Friday. “I think everybody is working in the interest of safety. We understand the impact to the airlines … but safety comes first [é primordial].”

Travelers rush to trains and ferries

Airline analyst Jamie Bowden, standing outside Heathrow where planes were parked at the gates, told CNN he had never seen a situation like this.

“I’ve been in the business for more than 30 years and I’ve never known Heathrow Airport to be this quiet [calmo, vazio],” Bowden said. “This kind of disruption [transtorno] is unprecedented [sem precedentes]. I think this will be going on [continuar] for at least eight to 10 days before it starts settling back to normal [até que a situação comece a voltar ao normal; até que a “poeira comece a baixar”].”

The volcano was still erupting and spewing [lançando] ash Saturday, said Agust Gunnar Gylfason, a project manager at Iceland’s Department of Civil Protection and Emergency Management. “We cannot tell how long an eruption like this will go on,” Gylfason said.

When the volcano last erupted in 1821, the eruption lasted on and off [com interrupções] for two years, Gylfason said.

Experts: No end to volcano ash in sight [à vista]

The closures [fechamentos (dos aeroportos)] in Europe were having an effect worldwide [no mundo todo]. There were delays [atrasos] and cancellations Saturday at all 10 of Russia’s international airports, including those in Moscow and St. Petersburg, the Russian Transport Ministry said.

Spanish airports were operating but experiencing delays in flights to northern Europe, the Spanish air traffic authority AENA said. As of [A partir das] 7:30 a.m. (1:30 a.m. ET) Saturday, AENA said 708 flights had been canceled between Spain and northern Europe out of a total of [de um total de] 2,300 — a figure [número] representing 30 percent of all scheduled flights.

Dear Ulisses.
Its really important to read the same texts as the Americans. The construction is different, the grammar is an adventure and the subjects updating teaches us new terms.
Thanks for the opportunity
Circe (no fear to make mistakes!)