The 29-year-old Briton [bretão, inglês] finished ahead of [na frente] both his championship rivals [rivais] Rubens Barrichello and Sebastian Vettel, giving him an unassailable [inatingível] lead [liderança] in the championship with just one race remaining [restando, faltando]. 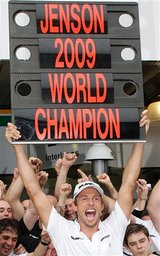 Starting from a grid position of 14th, Button made steady progress [progrediu continuamente] up the field [ganhando posições] after a series of impressive overtaking [ultrapassagem] maneuvers.

After the race, Button told the BBC: “It’s amazing. After the last few races I’ve had, this makes up for [compensa] it. It was such an awesome [impressionante, espetacular] race.

“21 years ago I jumped into a car and I loved winning. I never expected to be world champion in Formula One but I’ve done it today.”

The race was full of [repleta de] incident from the start with Toyota’s Jarno Trulli and Force India’s Adrian Sutil nearly coming to blows [quase saindo no tapa] at the side of the track [pista] after the pair collided on lap [volta] one. The accident also took out [tirou (da pista)] Renault’s Fernando Alonso.

Barrichello, who started from pole, managed to avoid the chaos [conseguiu evitar a confusão] on lap one and was leading [liderava] until his first pit stop on lap 21.

But the Brazilian lost places during the middle part of the race, while his team-mate Button was making up ground [ganhando terreno] picking off [ultrapassando] Renault’s Romain Grosjean, Kamui Kobayashi — who was making his first appearance [estreando] for Toyota this season in place of [no lugar de] Timo Glock — and Sebastien Buemi in faultless fashion [de maneira impecável].

Any chance of Barrichello taking the championship to the final weekend in Abu Dhabi died eight laps from the end when lying in fourth place [quando ocupava a 4a. posição] he suffered a puncture [pneu furado]. He eventually finished down in eighth.

Sebastian Vettel, who started a lowly [modesto] 16th place did his best to try and keep his title hopes alive and eventually finished fourth.

But it was too little for the German as Button, after a series of poor finishes [maus resultados] in recent races, finally found the form he showed earlier in the season [voltou a ter o bom desempenho do início da temporada].