(CNN) — Les Paul, whose innovations with the electric guitar and studio technology made him one of the most important figures [personalidades] in recorded music, has died, according to a statement [declaração] from his publicists [empresários]. Paul was 94.

Paul died in White Plains, New York, from complications of severe [grave] pneumonia, according to the statement. 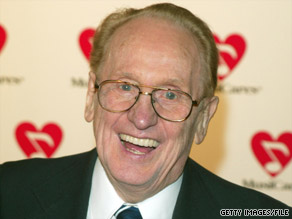 “If you only have two fingers [to work with], you have to think, how will you play that chord [acorde].” he told CNN.com in a 2002 phone interview. “So you think of how to replace that chord with several notes, and it gives the illusion of sounding like a chord.”

“Les Paul was truly [verdadeiramente] a ‘one of a kind [único, singular].’ We owe many of his inventions that made the rock ‘n roll sound of today to him [devemos a ele muitas das invenções…], and he was the founding father [precursor] of modern music,” B.B. King said in a statement. “This is a huge [enorme] loss to the music community and the world. I am honored to have known him.”

Joe Satriani said in a statement: “Les Paul set a standard [padrão] for musicianship [aptidão, habilidade (para tocar instrumento)] and innovation that remains unsurpassed [ainda não foi superado]. He was the original guitar hero and the kindest of souls [a mais doce das pessoas]. Last October I joined him onstage [no palco] at the Iridium club in New York, and he was still shredding [arrasando, detonando, fritando (inf.)]. He was and still [ainda] is an inspiration to us all.”

In a statement, Slash said, “Les Paul was a shining [brilhante] example of how full [completa] one’s life can be; he was so vibrant and full of positive energy.”

Lester William Polfuss was born in Waukesha, Wisconsin, on June 9, 1915. Even as a child he showed an aptitude [aptidão, jeito] for tinkering [mexer, fuçar], taking apart [desmontar] electric appliances [aparelhos] to see what made them tick [funcionar (inf.)].

“I had to build it, make it and perfect it,” Paul said in 2002. He was nicknamed [ganhou o apelido de] the “Wizard of Waukesha [Mago de Waukesha].”

In the 1930s and ’40s, he played with the bandleader Fred Waring and several [vários] big band [big band] singers, including Bing Crosby, Frank Sinatra and the Andrews Sisters, as well as with his own Les Paul Trio. In the early 1950s, he had a handful [um punhado] of huge hits [sucessos] with his then-wife [sua então esposa], Mary Ford, such as “How High the Moon” and “Vaya Con Dios.”

Paul also credited Crosby for teaching him about timing, phrasing [fraseado] and preparation.

Paul never stopped tinkering with electronics, and after Crosby gave him an early [antigo] audiotape recorder [gravador (de fita)], Paul went to work changing it. It eventually led to multitrack recording; on Paul and Ford’s hits, he plays many of the guitar parts [grava a maioria das guitarras], and Ford harmonizes [faz a base, faz a harmonia] with herself. Multitrack recording is now the industry standard.

But Paul likely [provavelmente] will be best remembered for the Gibson Les Paul, a variation on the solid-body guitar he built in the early 1940s — “The Log” — and offered to the guitar company.

“For 10 years, I was a laugh [eu era motivo de riso],” he told CNN in an interview. “But I kept pounding at them and pounding at them [insistindo incansavelmente] saying hey, here’s where it’s at [essa é a situação de momento]. Here’s where tomorrow, this is it [No futuro, ela será imbatível]. You can drown out [fazer desaparecer; afogar (lit.)] anybody [qualquer um] with it. And you can make all these different sounds that you can’t do with a regular guitar.”

Gibson, spurred [pressionada] by rival Fender, finally took Paul up on his offer [aceitou a oferta de Paul] and introduced [lançou] the model in 1952. It has since become the go-to guitar [a guitarra preferida] for such performers [artistas] as Jimmy Page.

“The world has lost a truly innovative [inovador, criativo] and exceptional human being today. I cannot imagine life without Les Paul,” said Henry Juszkiewicz, chairman [presidente (do conselho de administração)] and CEO [presidente (executivo)] of Gibson Guitar, in a statement. “He would walk into a room and put a smile on anyone’s face. His musical charm was extraordinary and his techniques unmatched [incomparáveis] anywhere in the world.”

Paul is enshrined [ocupa lugar sagrado] in the Rock and Roll Hall of Fame, the Grammy Hall of Fame, the Inventors Hall of Fame and the Songwriters [compositores] Hall of Fame. He is survived by [deixa] three sons, a daughter, five grandchildren and five great-grandchildren [bisnetos]. Until recently he had a standing gig [show lotado (com o público de pé)] at New York’s Iridium Jazz Club, where he would play with a who’s who of famed musicians [astros da música].

He admired the places guitarists and engineers took his inventions, but he said there was nothing to replace [substituir] good, old-fashioned [bom e velho] elbow grease [trabalho duro; graxa no cotovelo (lit.)] and soul [alma].