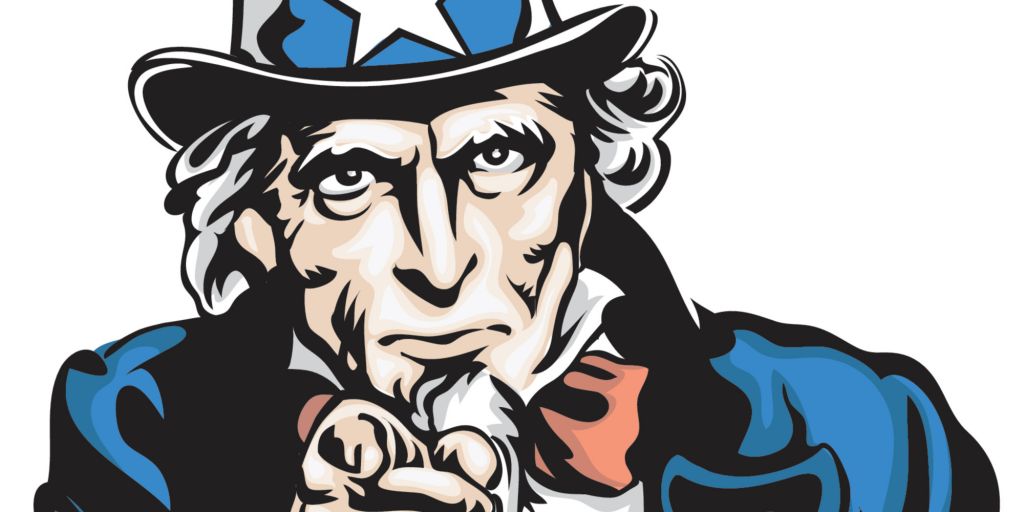 A widely held belief, reported as fact in supposedly reliable reference books, is that the original Uncle Sam was one Sam Wilson, a meat packer in Troy, New York, who supplied rations to the U.S. military during the War of 1812. Wilson was a subcontractor to one Elbert Anderson, and the letters “E.A.–U.S.” were stamped on all the pair’s army-bound grub. On being asked what the letters stood for (the abbreviation U.S. supposedly was unfamiliar at the time), one of Sam’s workers joshed that it stood for “Elbert Anderson and Uncle Sam,” meaning the jovial Wilson himself.

The joke was quickly picked up by Wilson’s other employees. Many of these men later served in the army during the war, and the story spread from there. This tale appears to have first found its way into print in 1842.

Very neat, but is it true? On the surface it might seem so. Researchers have established that Elbert Anderson and Sam Wilson did exist and did supply meat to the government during the War of 1812. What’s more, the earliest known reference to Uncle Sam in the sense of the U.S. government appeared in 1813 in the Troy Post.

But there are reasons to doubt. For one thing, the Uncle Sam = Sam Wilson story didn’t see print until 30 years after the event, which seems suspiciously tardy. Second, the notion that someone in 1812 would have to ask what “U.S.” stood for is hard to swallow–the available evidence shows that the initials were then in common use.

Third, there’s something odd about the newspaper evidence. Sam Wilson was a leading citizen of Troy, New York. Yet none of the newspapers in his hometown seem to have had any knowledge of his connection to Uncle Sam until very late in the day. The 1813 reference in the Troy Post says nothing about Wilson, noting merely that “the letters U.S. on the government waggons, &c are supposed to have given rise to [Uncle Sam].”

In 1816 the Post reprinted a story from Philadelphia claiming that Uncle Sam originated in the initials USLD, meaning United States Light Dragoons, a regiment of which had been formed in 1807. The account said that on being asked what the USLD on their caps stood for, the soldiers said “Uncle Sam’s Lazy Dogs.” In 1817 the Post took up the matter again, this time reverting to the original explanation that Uncle Sam was simply a jocular expansion of the letters U.S.

When Sam Wilson died in 1854, none of the newspaper obituaries by Troy writers mentioned the Uncle Sam connection. Significantly, however, two obituaries reprinted from Albany newspapers did talk about Uncle Sam. This suggests that the legend was concocted by out-of-towners with no firsthand knowledge of the facts.

So where did Uncle Sam originate? Nobody knows for sure, but it’s likely the original explanation in the Troy Post was correct: there was never an actual Uncle Sam; instead the name was just a wiseguy expansion of the initials U.S.

It’s worth noting that all the early references to Uncle Sam appeared in “peace” newspapers–that is, papers opposed to the War of 1812–and in every case the usage was derisive. This suggests Uncle Sam was dreamed up by critics of the government who simply wanted to personify the object of their scorn.

I don’t doubt, however, that the Sam Wilson story will live on. All the dissenting facts above were set down by antiquarian Albert Matthews in 1908, for God’s sake, and you see what headway they’ve made. Pit truth against a plausible legend and the truth hits the mat every time.