Why do we say that? Por que dizemos isso?
A origem curiosa de palavras e expressões do inglês do dia a dia
Jack Scholes, Editora Campus, 2003
Reviewed by Nancy Lake 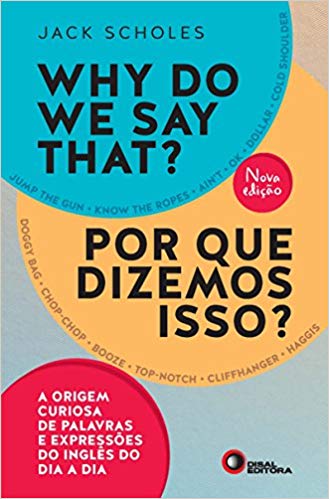 Why do we say that? Por que dizemos isso?

There is a lot more to this book than the title suggests. At first glance it would seem to be a vocabulary resource text, not quite like a dictionary and more than a list of expressions, translations and examples. There are over 500 words and related expressions presented in alphabetical order with a quick translation into Portuguese and sample sentences.

But the interesting part is to be found in the explanations about the customs, habits and traditions which brought these curiosities to the English language. Since American and British English might be as different “as chalk and cheese,” readers will be pleased to discover that, whenever possible, both versions are provided as in “aubergine” and “eggplant”. You can even find the definition and origin of the words England and America!

Portuguese speakers come across a variety of words we actually use in Brazil, plus their origins. Some examples are: yen, blockbuster, Hooligan, headhunter and boss. By now you must have a yen to know their origins! Other curiosities include a variety of expressions which came along with all of the immigrant populations. Hamburgers have their origin in Germany, which is far from the U.S. where most people think they are from. Have you ever wanted to know how to say something is far away as in “onde Judas perdeu as botas”? It came to English through Tagalog which is spoken in the Philippines and is way out in the boondocks, no less. And did you know that being rich in Portuguese is technically richer than in English?

Being born in a “berço de ouro” means that one was born with a silver spoon in one’s mouth. The practical, teacher side of this reviewer found that there are many important expressions not always found in textbooks but especially worthwhile for business students (sell like hotcakes, back to square one, hand over fist, back to the drawing board, quantum leap and strike while the iron is hot). It is familiarity with expressions like these which can empower learners with a special linguistic advantage. In fact, this volume offers just about something for everyone; it’s truly worthwhile to give or to get.

Nancy Lake is the Coordinator of Teacher Training for the CEL-LEP group.