By Tananarive Due (Special to CNN)

Editor’s note: Tananarive Due is an American Book Award-winning and NAACP Image Award-winning novelist. She is based in Los Angeles. Her website is http://www.tananarivedue.com/.

I was 17 when the “Motown 25th Anniversary Special” aired in 1983, and my parents, sisters and I first saw Michael Jackson moonwalk to “Billie Jean.” 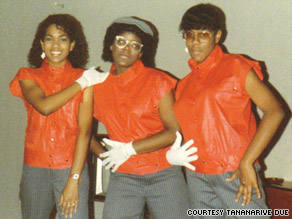 He sent a lightning bolt [raio] through our living room [sala de estar], and all of us leaped [saltar] to our feet with shouts. He may have been the best entertainer I live to see. His music asked us to transcend race and geography, hate and bigotry [preconceito, intolerância], and made us feel like we were the world.

In recent months, I showed my 5-year-old son, Jason, that Motown performance on YouTube. “Billie Jean” made Jason want to moonwalk and wear a glove [luva]. “Beat It” inspired Jason to kick his leg and fling [lançar, atirar] his head from side to side like Michael.

But it has been a long time since I could watch Michael Jackson videos without feeling sad. His death is only the next stage of the loss. Michael Jackson left the music world to mourn — but many of us, especially black Americans, felt like we lost a family member on Thursday. He pained [causar dor, mágoa ou sofrimento; afligir] and puzzled [estarrecer; surpreender; confundir] us, but we still loved him.

Until Thursday, some of us had forgotten how much.

Michael was not always easy to love. He tested us, sometimes asking us to ignore what we could see with our own eyes. We may never know fully [completamente] what Michael did or didn’t do, but he was like the lost relative we wished we could bring back to shore [praia, costa; terra].

When Jason asked questions about Michael’s changing face in the videos, I showed him the beautiful brown-skinned [negro; (lit.) de pele marrom], bright-eyed [de olhos brilhantes] little boy who grew up in my family’s living room.

There is supreme irony in the death of Michael Jackson the same year as the inauguration of the first black president. Michael, who would ascend [ascender, subir] higher than any black artist in music history, learned a bitter [amargo] lesson: Even at the top of the mountain, there is only the man in the mirror [espelho].

Jason isn’t old enough to fully understand black and white, why his grandmother was sent to jail [cadeia] for ordering a hamburger at a Woolworth lunch counter [balcão de lanchonete] in 1960, or how an ill-used [maltratado] child’s soul might never find its way back home.

So I told Jason about the time Mommy, Grandma, Grandpa, Aunt Lydia and Aunt Johnita [now an assistant general counsel at CNN] drove from Miami to Jacksonville to see the Jacksons’ Victory Tour in 1984, when Michael Jackson ruled [dominar] the world. How his aunties [titias] and I dressed up [vestir-se bem, com elegância] for the concert in our own gloves.

After the concert, still floating [flutuando] from the surreal experience, we approached a stretch limousine [limousine feita sob encomenda] on the highway [estrada]. As my father sidled [andar de lado; emparelhar] our car closer and my sisters and I pressed our noses to the window to try to see, the limo’s tinted [escuro; pintado] electric window slid down [abaixar].

A sparkling [brilhante] silver [prateada] glove waved out [acenar] to us.

When we saw that glove, the whole car screamed [gritar]– even my father, who was driving.

My sisters and I begged [implorar] my father to follow the limousine…and it finally came to a stop in front of our budget hotel [hotel barato, acessível]. When the rear door [porta traseira] opened, a white blond-haired [loiro] decoy [isca; dublê] stepped out [descer (do carro)]– wearing a silver Michael Jackson glove.

If only we’d never seen past [ver através] the tinted window.

If only we had a perfect memory of Michael waving goodbye.

The opinions expressed in this commentary are solely those of Tananarive Due.