Thanksgiving is a national holiday that goes back to our early colonization. It was in 1864 that President Abraham Lincoln officially declared it a national holiday, but the first celebration was in 1621. Of the original one hundred and five colonists who had landed in Plymouth, Massachusetts one year before, only fifty-five survived. Arriving from England at the beginning of winter, the colonists, known as the Pilgrims, had had little food left after their voyage. Their survival of that first arduous winter in Plymouth, Massachusetts was mostly thanks to the Wampanoag Indians who gave them game and their remaining corn harvest from the previous year. The Indians taught the Pilgrims how to hunt and when spring came there were also lessons on how to plant the native vegetables of corn, squash, pumpkin and beans. From the Old World they had brought oats, wheat, barley and peas and these too were planted. During that spring and early summer, while the crops grew and the wild fruits and berries ripened, they survived on quahogs (a kind of North American clam) and other shellfish. 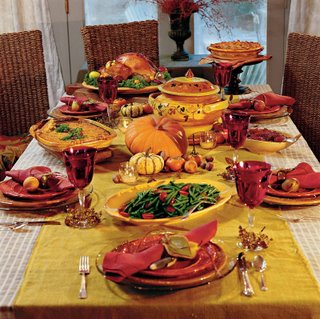 As was costumary in most agrarian cultures, autumn signaled the time for a harvest celebration. The Pilgrims were of a Protestant sect called Puritans who had left England because of persecution. When this time of celebration came at the end of the first year, they offered prayers of gratitude to their God for having endured the voyage and for having found a place where they could practice their religion in peace. They gave thanks to God for having lived through the harsh winter and to the Wampanoags for their help and guidance.

That first Thanksgiving was probably in October, lasting for several days. There was an abundance of food but, since details were not recorded, we can only guess at what they served. The menu probably have included shellfish, eel, venison, Succotash, watercress, leeks, stewed pumpkin and other kinds of squash. There also might have been Corn Bread, berries and plums, and a sweet wine made from wild grapes. Some believe that a contribution from the Indians was popcorn.

Some foods, which today seem essential to a Thanksgiving menu, were not yet available. There were no pies because probably they still did not have flour to make a crust. Potatoes were not included, having been introduced into North America only in 1719. Sweet potatoes, grown in the South, also came later.

The next reported Thanksgiving celebration was on July 30, 1623. There were cranberries, turkey and pumpkin pie; the beginning of a culinary tradition that American families have passed down for more than three centuries.

Over the years, American cooks have added stuffing to the turkey and cooked the cranberries into a sweet sauce. Since the 1800’s, the menu has included cooked vegetables, Succotash, mashed potatoes, squash and three or more kinds of pies. Today a typical Thanksgiving is not much different. Deviations are of course permitted, just as each American family has its own special recipes, but the emphasis should be on foods harvested in the autumn and desserts that are principally of fruits and nuts.

Thanksgiving is celebrated on the fourth Thursday of November with an afternoon feast, but the long weekend starts, for most, on Wednesday when schools and businesses close early. Airports and highways become congested as the many Americans who have moved far from their roots try to go back home for this special day. It is a time for family, but much more than at Christmas, Americans open their homes to friends who, for whatever reason, are unable to join their own. Some people choose this day to volunteer their help in preparing and serving a traditional turkey dinner to the poor and homeless.

Football games, New York’s Fifth Avenue parade and the start of the Christmas shopping frenzy are all traditional activities. Most important, however, is that Thanksgiving is a time for reflecting on our good fortune, acknowledging it in whatever way suits each individual. It is a religious holiday that belongs to no one faith, appropriate in a country that was founded on the principles of religious freedom.

Suggestions for a Thanksgiving Dinner Menu

Congratulations for the great article! Really, knowledge about the culture of a people is very important to learn their language.